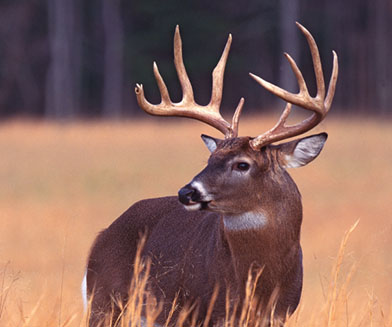 DNA is the genetic material of all living things and the genetic information is written in the DNA molecule in the form of genes. We understand the physical traits of parents show up in their offspring because of genetics. This genetic information is passed on because one half of an offspring's DNA comes from the sire and the other half comes from the dam.

Breeders hope that a buck with large antlers will pass that genetic trait to his fawns. Breeders select the bucks that will be used in their breeding programs and try to prevent other bucks from contributing. DNA testing has become a valuable tool for breeders. The very same technology used in human identification can be applied to deer. The test looks at specific pieces of DNA which are referred to as "DNA markers." These markers come in pairs, one from the sire and one from the dam. The pattern of each of the markers is the genetic profile or genotype of the animal. This profile is constant for an animal but differs between animals.


Samples processed and results returned in 15 business days or less.